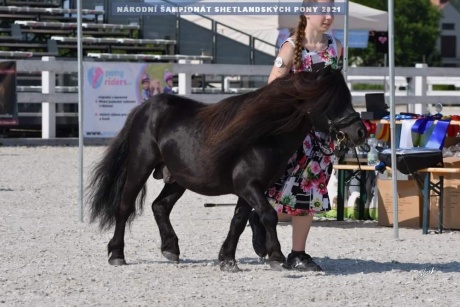 I searched high and low for Jack. I knew he was likely the last 100% marshwood stud alive. I found the owner's last name in SPSBS, however the owner was not a SPSBS member; therefore there was no closer information that could be used to determine Jack's location - or if he was even alive.

It was thanks to facebook I was contacted by Mrs. Helen Coxon (Carajane Stud). She told me she had a number of Knock ponies in her stud in Ireland. Among them was Jack. Helen had Jack on loan for a number of years. She didn't use him to breed (she always had two or three other licensed stallions) but as a companion for other stallions. Thankfully Helen didn't have Jack fixed. And that is how 17 years old Jack came to live with us in the Czech to have some beautiful babies.

Jack is a half-brother to our Knock Fortune Maker.

Jack is a wonderful stallion. He's calm, gentle and chivalrous to all the mares. With people he's friendly and well-behaved.

He is infinitely patient with our two year old Eitan - even more patient than Fortune.

He spent the winter with Fortune, Equerry and Eiten without a hitch.

Jack is simply an amazing, poised stallion and I am very grateful to Helen for entrusting me with him. 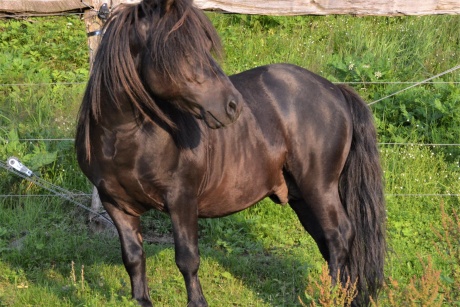 Equerry came to the Czech Republic thanks to Mrs. Monika Mančíková. She bought him as a 2 years old colt in the autumn of 2013 at the Bunswaard stud from Mr. Ton Burgers. During his stay with Monika Mančíková Equerry recieved a high quality training with long rains and as a ridden pony. His mother is one of the most successful mares in the UK - Exhibit of Transy.
Mrs. Monika lent Equerry to me for the duration of season of 2017. In 2018 a colt named Plamp Eitan was born to mare Oxendale Jubilant. It was a classic merge of Marshwood-Transy bloodline. Monika decided not to breed . A year later she offered me him for sale. He spent the season of 2019 with Plamp Jo. Jo is in foal now.

Equerry is a friendly, calm, patient and very cooperative pony. He likes and trusts people. He is suitable for working with children as well. He shares the fence with the other stallions during the winter and gets along well with them.

He is licenced stallion since 2014 with the score of 7,9 points. He underwent licensing in England in the 2018.

Quallity piebalt stallion with excellent pedigree having been sired by the wonderful Marshwood bloodlines. Fortune was the last foal to be sired by Surpass of Marhwood as he died of old age. Mrs. Sheila Edwards is the breeder of the Knock ponies and over the years she has been a very sucessful with many of her ponies going to european countries.

Knock Fortune Maker has a kind temperament and is a pleasure to own. He is very fertile and good with his mares. He does not like changes, he is conservative. Fortune sires mainly coloured foals (eleven in England, 9 Piebold, 2 Skewbold). We bouht him in 2010 from the Willoughby Stud in Linconshire - England as an eight years old stallion.

Fortune underwent licensing in England in the 2006.

2011: 3rd place at The National Championship of Shetland Ponies in class stallions and geldings three years old and over.

2012: 3rd place at The National Championship of Shetland Ponies in class stallions and geldings three years old and over.

2016: 2nd place at The National Championship of Shetland Ponies in class stallions four years old and over.